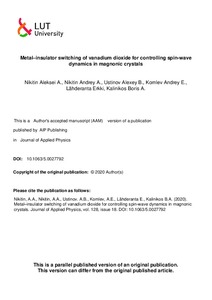 The present work focuses on the effect of vanadium dioxide (VO2) films exhibiting a metal–insulator transition (MIT) on the performance characteristics of the magnetic multilayers. It has been shown that the MIT provides a novel mechanism for controlling the microwave spin-wave dynamics in the yttrium iron garnet (YIG) films. In particular, the low and high levels of microwave attenuation of spin waves transmitted through the YIG–VO2 bilayer has been observed due to a variation of the VO2 conductivity within a narrow temperature range. This effect has been utilized to realize fully reconfigurable magnonic crystals composed of the thickness-modulated YIG and regular VO2 films. A promising functionality of the proposed waveguiding structures arises from a controllability of wave intensity, which provides an altering of the frequency response from an original band structure to a full rejection of spin waves. Numerical simulations taking into account both the YIG film saturation magnetization and the VO2 film conductivity have confirmed the experimentally observed spin-wave dynamics. An interest in ferrite–VO2 bilayers arises not only from possible practical applications but also from a variety of fundamental scientific problems devoted to the physics of wave phenomena in planar thin-film magnetic multilayers.