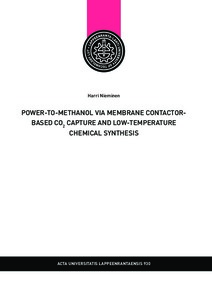 Mass transfer performance of a continuously operated membrane contactor-based CO2 capture unit was studied. The effects of key operating parameters were investigated, and established mass transfer models were applied to characterize the chemical absorption process and to identify limiting mass transfer resistances. CO2 fluxes and values of overall mass transfer coefficient were comparable to literature data. The steady-state absorption rate was found to be limited by desorption of CO2 from the loaded absorbent solution. Ineffective desorption also resulted in high specific energy requirement for CO2 capture.

Liquid-phase methanol synthesis in alcoholic solvents facilitates the hydrogenation of CO2 to methanol at reduced, thermodynamically favourable temperatures compared to conventional methanol synthesis processes. Experimental investigations on this process pursued increased methanol productivity by combining heterogeneous catalysts in a cascade catalytic system, and by continuous removal of by-product water using a molecular sieve adsorbent. Both approaches resulted in improved methanol productivity, with a more significant improvement found with use of the water-selective absorbent.

The feasibility of the low-temperature methanol synthesis process was studied by means of a techno-economic analysis and compared to a gas-phase CO2 hydrogenation process. The use of different alcoholic solvents was considered. The alcoholic solvent in the liquid-phase processes was found to lead to energy- and cost intensive separation. As a result, the methanol production cost was higher compared to conventional gas-phase process. Electrolytic hydrogen constituted the largest fraction of the overall cost in all processes.