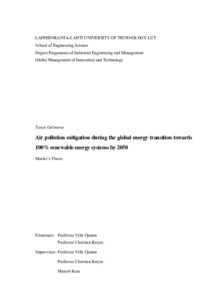 Air pollution induced by energy use is linked to causing and aggravating cardiovascular diseases, strokes, acute respiratory diseases and cancer. Particulate matter emanating from combustion processes including traditional biomass poses substantial threat to people’s health across the world. The growing use of pollutant emitting fuels exposes already vulnerable populations to even more toxic levels of pollution, predominantly in urban centres around the world. The World Health Organisation estimates that around 9 out of 10 people breath polluted air and around 7 million premature deaths occur every year as a result of exposure to dirty air. The growth of renewables for power generation has proved to bring about the benefits of cleaner air in regions and countries that have high shares of renewable energy installations. This research aims to explore the development of NOx, SOx, PM2.5, and PM10 emissions, which form the major air pollutants in a global energy transition scenario towards 100% renewable energy. Total emissions are projected to drop by almost 92% in 2050 compared to 2015, with annual premature deaths dropping by about 97% from 5.2 million deaths in 2015 to 150 thousand deaths by 2050, and annual costs of damage are drastically reduced by 88.5% from about 4600 b€ in 2015 to 529 b€ by 2050. Defossilisation and shift to renewable forms of energy enables massive decline in GHG emissions as well as emissions of air pollutants that are directly harmful to human health.