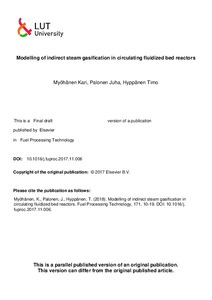 The indirect steam gasification in circulating fluidized bed reactors was studied by modelling. The object of study was a coupled 12 MWth gasifier-combustor system, which was fired by woody biomass. The heat for the steam-blown gasifier was produced in the air-blown combustor and transported by circulating solids between the interconnected reactors. The system was modelled by a semi-empirical three-dimensional model, which simulated the fluid dynamics, reactions, and heat transfer in the coupled process. The studied cases included different temperature levels, which were controlled by the amount of additional fuel feed to the combustor. The model concept can be later applied to study sorption enhanced gasification, which is a promising method for sustainable production of transport fuels to substitute fossil based fuels.