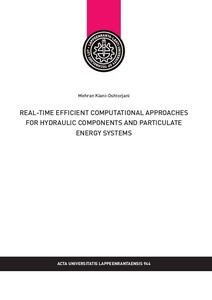 Kaikki oikeudet pidätetään.
In reference to IEEE copyrighted material which is used with permission in this thesis, the IEEE does not endorse any of Lappeenranta-Lahti University of Technology LUT's products or services. Internal or personal use of this material is permitted. If interested in reprinting/republishing IEEE copyrighted material for advertising or promotional purposes or for creating new collective works for resale or redistribution, please go to http://www.ieee.org/publications_ standards/publications/rights/rights_ link.html to learn how to obtain a License from RightsLink.
Näytä kaikki kuvailutiedot
Julkaisun pysyvä osoite on
https://urn.fi/URN:ISBN:978-952-335-609-2

The so-called fourth industrial revolution requires high-speed data transmission and application of real-time computation to the phenomena. These two technologies highlight the potential of the digital-twin concept for industrial applications: cyber-physical systems form the core of ‘Industry 4.0’, in which physical systems are integrated with doubles created in cyberspace. The most important feature of cyber-physical systems is precisely the data-transmission and calculation speeds involved. Thanks to 5G technology, data transmission is substantially expedited without unacceptable losses in reliability. A challenge remains, however: developing a reliable and cost-effective way to increase the speed of calculations sufficiently for real-time simulation. Two main strategies are employed to this end. The first approach is to adjust the algorithms to perform fewer mathematical operations while designing them to be appropriate for parallel computing in line with MPI or OpenMP standards. The other approach entails using hardware such as GPUs, FPGA micro-controllers, and other systems with high-speed clocks. The latter solution is not suitable for some sensitive applications, wherein such factors as cost, weight, and other issues of economy render fast algorithms the only viable option. Industrial devices can be roughly grouped into machinery and energy systems. Usually in a machinery system, a multibody mechanism operates as a subsystem with a fluid power module and a control circuit. As the literature shows, the greatest challenge such a system presents for real-time simulation is related to fluid power systems. Indeed, if the singularity problem of fluid power systems can be resolved, one could simulate the whole package in real time. Therefore, the author set out to shed some light on the origin of this problem, from a mathematical point of view and then with regard to its physical interpretation. Recognising that the stiffness problem associated with hydraulic circuits follows primarily from three elements – the orifice model, the presence of a small volume in the circuit, and bulk modulus models – the author developed several recommendations. The author suggests using a two-regime orifice model, documented in the literature, wherever the pressure drop approaches zero. Introducing a perturbed model to eliminate the stiffness problem arising from the smallness of the volume, the author implemented corresponding algorithms with a simple hydraulic circuit and found this model able to increase the integration time step by one order. In addition, the model is successfully applied to a four-bar mechanism and determined that it can make the computation 2.5 times faster. After investigating several methods to alleviate the stiffness problem created by the small volume, it is concluded that the perturbed model is best suited to a wide range of conditions, irrespective of the complexity of the hydraulic circuit. At the core of the stiffness challenge posed by fluid power systems is the difference in responses between time scales; however, because the small time scales can be ignored in hydraulic systems, the perturbed model poses no problem. Energy systems, on the other hand, involve various phenomena, occurring on different spatial scales. Therefore, coupling simulations performed at two scales improves accuracy and increases the simulation speed. Some algorithms are introduced for either of these scales, suitable for parallel computing, and implemented for a GPU via CUDA C and PGI CUDA Fortran compilers. By employing the lattice Boltzmann methods (LBM) developed, the author investigated the fluid flow through a porous medium created with spherical particles. In addition, the thermal behaviour of saturated porous media was studied under several heat-source conditions. The lattice Boltzmann model was validated by comparing its results with those of another LBM model and also Fluent software. The project also investigated the effects of external load on the thermal response of a packed bed– generated with spherical particles– by using thermal discrete element method (TDEM). It became evident that increasing the external load reduced the probability of vertically oriented contacts, thereby diminishing the effective thermal conductivity. Also, from among the particle shapes examined, TTeT offered the highest thermal effective thermal conductivity, followed by a packed bed generated with cubic particles. The author ascertained that, while the contact area alone is not a sufficient parameter to express the effective thermal conductivity behaviour of granular packed beds, contact angle isotropy emerged as a parameter that can explain the trend of effective thermal conductivity. For the shapes investigated, an exponential relationship was identified between effective thermal conductivity and contact angle isotropy. To investigate the effects of the fluid on the thermal conduction, several particle clusters are chosen at random and resolved the temperature field both for fluid and for solid. The author concluded that the fluid presence is more influential if the solid-to-fluid thermal conductivity ratio is below 10. Above this threshold, the vacuum and different fluids do not have a significant effect on the effective thermal conductivity of packed bed and one can simply assume vacuum in TDEM simulations.