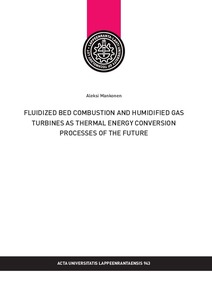 Growing awareness of environmental issues related to heat and electrical energy production has led to sustained research efforts to find ways to reduce fossil energy consumption and increase renewable energy usage. Future energy scenarios envisage solar, wind, and hydro conversion as meeting the majority of energy demand. However, these scenarios also include the role of thermal conversion, since fuels for thermal power plants can be readily stored and energy output easily controlled. This dissertation investigates promising technologies that retain the advantages of thermal conversion while using more sustainable fuels.

Fluidized bed combustion of biomass possesses multiple advantages as compared to the alternative combustion technologies, such as stoker firing. Conversion of electricity to fuels by means of water electrolysis and methanation reactors for example, or power-tofuels, is expected to be a part of a sustainable and environmentally friendly energy system of the future. Due to their origin, the power-to-fuels products, such as synthetic natural gas, are ideally suited to gas turbines or internal combustion engines. In recent years, a significant amount of research has been conducted on humidified gas turbines, which, it has been calculated, can exceed the efficiency of internal combustion engines and even outperform the combined-cycle gas turbines in terms of electrical efficiency while requiring less expensive equipment. In view of their clear potential, fluidized bed steam generation and humidified gas turbines have been selected for analysis as prospective thermal energy conversion processes of the future.

The Second Law analysis has become an integral part of energy systems analyses due to its ability to quantify the degree of usefulness of the energy. The Second Law analysis, or exergy analysis, also quantifies the amount of degradation of available energy in each component of the system, which is particularly useful in examining the development potential of the system. Exergy related phenomena of fluidized bed furnaces and humidified gas turbines are identified and analyzed as a central part of this work. It is found that the irreversibility in the fluidized bed steam generation is inherently associated with the technology and only major technological modifications can significantly improve the Second Law efficiency. Second Law analysis of humidified gas turbine points out that humidification is rather a means of recuperating waste heat than improving the Second Law efficiency.