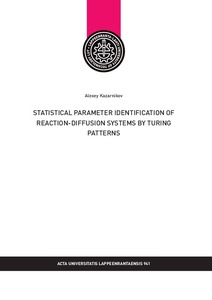 Mathematical models allow a connection to be made between a pattern observed on a macroscopic scale and a hypothetical underlying mechanism. Different mechanisms, however, can result in similar patterns. In developmental biology, for example, de novo formation of periodic structures similar to purely chemical Turing patterns can also be obtained using mechano-chemical models with only one diffusing morphogen. In addition, patterns obtained with a fixed model and fixed parameter values but with small random perturbations of initial data, will significantly differ in shape, while being nominally of the same type. With randomised inital data, each model parameter value corresponds to a family of patterns rather than a fixed solution. Consequently, standard residual-based methods such as least squares cannot be used for parameter estimation. A computational approach allowing model calibration to certain patterns will enable not only model identification based on experimental pattern data but also comparison of different mechanisms by indicating how well a specific model can be fitted to the data produced by models based on another mechanism.

The aim of the current thesis is to present a solution for such problems. The situation is analogous to the identification of chaotic systems, as in both cases different initial values lead to different solutions which, however, belong to the same family of solutions. In this work, a recently developed statistical approach for parameter studies of chaotic dynamical systems is modified for application with non-chaotic reaction-diffusion systems used as test examples of pattern formation processes. A statistical algorithm for parameter identification of reaction-diffusion systems is suggested that needs steady-state pattern data only, without knowledge of initial values or transient data. Bayesian sampling methods are able to quantify “all” the model variants that are able to fit given pattern data well enough. The developed approach provides a tool for robust discrimination of competing mechanisms proposed to explain experimental data.

Three classical reaction-diffusionmodels of pattern formation are considered: the FitzHugh- Nagumo model, Gierer-Meinhardt system and Brusselator reaction-diffusion system. The accuracy of model identification achieved by different amounts of training data is quantified by MCMC algorithms. The performance of the method is satisfactory in all cases, as verified by Bayesian sampling methods: a large amount of data leads to an extremely accurate detection of changes in model parameters, practically impossible to detect visually, while a modest amount of training patterns leads to the same level of detection as, roughly speaking, might be observed with the naked eye. Finally, parameter identification is demonstrated, i.e. convergence of the method when starting with initial parameter values far away from the correct ones. The identification is done by minimizing of a stochastic cost function, solved by an evolutionary optimization algorithm.

The construction of a posterior parameter distribution by Bayesian sampling methods and running the stochastic optimization algorithm requires a large number of model simulations. Therefore, the efficiency of the numerical code is crucial for successful application of the approach. An optimized parallel algorithm is implemented for the numerical solutions of the equations under study. The calculations are done in graphical processing units (GPUs) using the Nvidia CUDA parallel computing platform. Significant improvement in performance is achieved, making the proposed approach suitable for numerical applications.