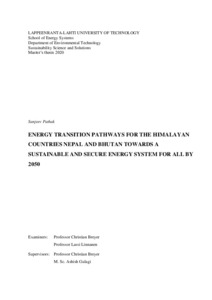 The Himalayan countries Nepal and Bhutan have been confronting similar climate change and energy emergency for quite a long time. Its influence can be felt as a barrier in financial, social, infrastructural, and political development. Despite having an enormous amount of renewable energy sources, these nations are unable to fulfil their current energy demand by local resources. Thus, depending on energy and fossil fuel imports from India. This study guides to a path of energy independency, energy for all and an energy transition towards a 100% renewable energy system. The modelling of the energy sector is done using the LUT Energy System Transition model for a period from 2015 to 2050 in a 5-year time step. This study covers the main energy sectors: power, heat, and transport. Two scenarios are visualized, one considering greenhouse gases (GHG) emissions and the associated mitigation cost and another without these costs, though both scenarios aim at achieving a high share of renewable energy by 2050. A substantial drop in levelized cost of energy is observed for a scenario without GHG emission cost, however, taxing GHG emissions will accelerate the energy transition with a LCOE on a similar level. It is well possible to transition from 90 €/MWh in 2015 to 49 €/MWh by 2050 for the entire energy system by utilizing indigenous low-cost renewable energy. The role of solar photovoltaics and hydropower is imminent in 2050, having a share of 67% and 31% respectively. Consequently, this leads to zero GHG emissions. An energy transition towards a sustainable and secure energy system for all by 2050 is well possible in Nepal and Bhutan only through 100% renewable sources and it is both technically and economically feasible despite having substantial limitations in infrastructure and economic development currently.