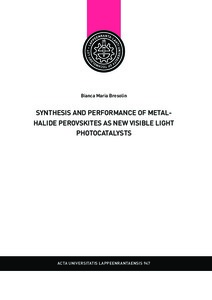 Solar-light power, as a sustainable energy source, is renewable, inexhaustible, and available worldwide. The scientific and engineering interest in solar-light based technologies has grown exponentially as a cost-effective and energy-saving approach.

Titanium dioxide (TiO2) is the most employed photocatalyst by far due to its photostability, non-toxicity, and abundance. However, TiO2 limits its applicability in the ultraviolet wavelength range, accounting for only about 5% of total solar-light power. The energy's undesired dissipation due to the photogenerated charge carriers' fast recombination rate further reduces its photocatalytic efficiency. Therefore, it seems of great significance to study possible alternative materials to harvest visible light, recognized as the higher energetic part of the solar spectrum.

In this work, MHPs were proposed as potential visible light photocatalysts, widening the engineering solutions using raw and composite materials.

MHP, as a new generation material, was tested for environmental remediation, particularly for the photodegradation of organic contaminants. Morphological, optical, and electrochemical properties of the as-prepared photocatalysts were investigated to provide insights into their photocatalytic processes. Laboratory-scale conditions were adopted for practical reasons when designing simple reactors and systems.

First, a lead-based CH3NH3PbI2 photocatalyst was prepared due to the photovoltaic field's outstanding efficiency. Then, lead-free (CH3NH3)3Bi2I9 was preferred due to its lower toxicity, ascribed to the presence of lead. The bismuth-based hybrid organic-inorganic perovskite (HOIP) resulted in a suitable visible light photocatalyst with higher water stability and photocatalytic efficiency than the lead-based counterpart. The HOIP recorded a photodegradation efficiency of 99% and 75% on Rhodamine-B (RhB) in 180 minutes, respectively, under visible light halogen lamp and light emitting diodes (LEDs) lamp irradiations. The photocatalytic activity was further tested on the degradation of different kinds of dyes, such as methyl blue (MB) and reactive blue (RBL). Moreover, a mixture of different dyes, such as crystal violet (CV) and MB, was photodegraded to simulate a realistic industrial wastewater effluent.

On the other hand, the environmental instability of the organic fraction in HOIPs ultimately obstacles the commercialization of these emerging materials. Thus, an allinorganic material, Cs3Bi2I9, was prepared and used as a visible light photocatalyst. The complete photodegradation of RhB was achieved in 180 minutes under visible light
irradiation. The activity of the recycled photocatalyst confirmed its suitability for multiple uses without evident photocatalytic efficiency decrease. Moreover, the detection of trapped electrons and holes supports the potential of Cs3Bi2I9 as a suitable material for photocatalytic reactions.

Thus, the Cs3Bi2I9 photocatalyst was employed to design appropriate composites. The photocatalytic efficiency was enhanced by coupling Cs3Bi2I9 with more traditional semiconductors such as TiO2 and g-C3N4. The photoelectrochemical studies revealed the composites' synergetic effects, supported by the experimental degradation tests on organic pollutants.

This experimental research means to offer new insights into the application of metal halide perovskite and its composites in photocatalytic technologies.