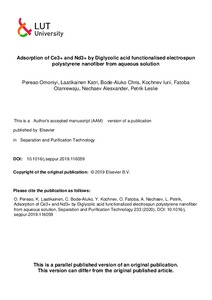 Highly selective and stable ligands with fast kinetics for rare earth element extraction are not well developed. Durable attachment of ligands to the support would make regeneration possible. Polystyrene nanofiber supports (PS-nF) were prepared using the electrospinning method. Thereafter, PS-nf were chemically modified with diglycolic anhydride (DGA) to produce novel electrospun polystyrene diglycolic acid nanofiber (PS-DGAnf) adsorbents. The immobilisation reaction proceeded via an electrophilic aromatic substitution of the ligand onto the PS nanofiber. The maximum gravimetric loading of DGA on PS nanofiber was 0.827 g g−1. The unmodified and modified nanofibers were characterised by ATR-FTIR, HR-SEM, BET and TGA. After optimising pH, time and concentration, the equilibrium adsorption and binding kinetics of cerium (Ce3+) and neodymium (Nd3+) ions on the nanofibers surface were examined at pH 6. The adsorption capacity of PS-DGAnf for Ce3+ and Nd3+ at pH 6.0 was 152.5 mg g−1 (1.09 mmol/g) and 146.2 mg g−1 (1.01 mmol/g) respectively. Selectivity of Ce3+ over Ni2+, Co2+ and Sr3+ was also studied at pH 6. The amount of Ce3+ adsorbed even in the presence of interfering ions was 100.3 mg g−1, which was only a little lower than 119.4 mg g−1 obtained in a single ion solution. The rapid adsorption kinetics of Ce3+ and Nd3+ ions were achieved within 15 mins. The desorption and regeneration was carried out with 1 M nitric acid and the developed PS-DGAnf adsorbent could be reused for 4 cycles without any substantial loss to its adsorption abilities.