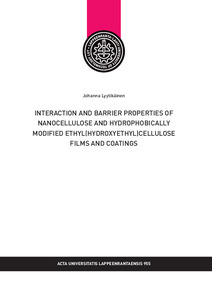 In food packaging applications, the oxygen barrier and resistance to oil and grease are essential properties of the packaging. The barrier performance of fibre-based packages needs to be improved with a coating, which is typically a fossil-based plastic. However, the demand for packaging made from more sustainable sources has been driving the development of bio-based coatings and especially of cellulosic materials for barrier materials.

Coatings and films consisting of methyl nanocellulose, hydrophobically modified ethyl(hydroxyethyl)cellulose (EHEC) and microfibrillated cellulose (MFC) were prepared. The temperature dependence and the interaction between the components in solution were investigated with rheological measurements. The film formation and barrier properties of the self-supporting films and coatings were investigated with surface imaging, wetting and liquid spreading and surface energy measurements and by measuring the oxygen transmission rate and the oil and grease resistance of the materials. The paperboard substrates were blade-coated but foam coating was also used to create thin coating layers on paper prepared with different levels of smoothness and hydrophobicity or hydrophilicity.

The interaction between the components was observed as changes in initial viscosity and in cloud point and gelation temperature, but also in the transparency of the films and in the oxygen barrier properties. In some cases, at elevated temperatures, air bubbles were formed in the cast films, but the air bubbles did not affect the oxygen transmission rate through the films. Cast films and methyl nanocellulose-based coatings were found to have a high resistance to oil and grease, but the spreading of the oil on the samples varied significantly suggesting that methyl nanocellulose and hydrophobically modified EHEC change the wettability of the surface. Even the low coat weights achieved with foam coating were able to make the surface more hydrophobic or to increase the oil repellence.