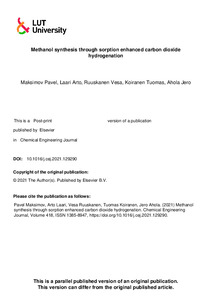 Synthesis of methanol from carbon dioxide is affected by thermodynamic limitations and excessive formation of water that might have a detrimental impact on methanol production rate and catalytic activity. To overcome these effects, sorption enhanced (SE) carbon dioxide hydrogenation to methanol with selective in-situ adsorption of water is investigated both experimentally and via process simulation. A significant improvement in the process performance due to the thermodynamic equilibrium shift, achieved as a result of selective water removal, is reported. Depending on the process conditions, during the SE phase, outlet methanol concentration is ca. 150–290% of the steady state values recorded after the adsorbent saturation. For carbon monoxide this factor is ca. 220–510%. The effect of process parameters such as reactor pressure, temperature, overall gas flowrate and catalyst-to-adsorbent ratio is thoroughly addressed. Reactor pressure is demonstrated to affect methanol production during the SE phase to the greatest extent. Particularly, increasing reactor pressure above 40 bar enhances methanol formation during the SE phase at the cost of decreasing carbon monoxide production, thus improving process selectivity. Although increasing reactor temperature above 250 °C favors carbon monoxide formation, it results in suppressed methanol production and considerable shortening of the SE phase duration. Because of the RWGS reaction fast kinetics, the variations in gas hourly space velocity and amount of the adsorbent loaded in the reactor affect production of methanol more than carbon monoxide. The parameters describing kinetics of the involved reactions and water adsorption are adjusted based on the acquired experimental data.