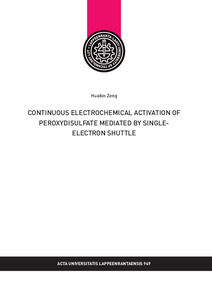 With the burgeoning development of various industries, an increasing number of organic compounds have been synthesized to satisfy societal demand. However, the unavoidable emissions of the used compounds into the natural environment have become a cause for considerable concern. Most importantly, traditional biological treatments have been proven ineffective for removing these emerging contaminants due to the nonbiodegradable properties of the materials, which can be even toxic to microorganisms. For the purpose of solving the problem, advanced oxidation processes have been deemed promising technologies for the purposes; these involve the in-situ generation of reactive oxidative radicals, such as hydroxyl radicals (•OH) or sulfate radicals (SO4•–). Although SO4•– can be readily formed from peroxydisulfate (PDS) activation by a single-electron reductive catalyst, the use of the catalyst has certain drawbacks, such as the amount of the catalyst required and its and subsequent disposal. By introducing an electron source (hydroxylamine, MoS2, or boron) into the system, the catalyst can be theoretically regenerated, resulting in continuous PDS activation. Use of the electron sources as an electrochemical approach for PDS activation, in which electrons are employed as a reductive activator, can meet the demand for green chemistry.

In this thesis, the PDS activation process for the decontamination of organic compounds, is presented. The process was initiated by electrons donated by a Ti cathode. The concentration of SO4•– near the cathode was kept at a non-ignorable level, shifting the reductive atmosphere to an oxidative atmosphere for Cu-EDTA oxidation. In particular, incorporating the Cu(II)/Cu(I) redox pair with the electrochemically activated PDS system by substituting the Cu cathode for the Ti cathode accelerated the PDS activation considerably. The single-electron shuttle (Cu(II)/Cu(I) in this project) could bridge the cathode and PDS, continuously injecting a single electron into the PDS to yield SO4•–. Meanwhile, another less toxic electron media, the Fe(III)/Fe(II) redox pair, was also proven to be efficient in catalyzing the cathodic activation of PDS. Employing the Pd/Al2O3 particle electrode in the three-dimensional reduction system allowed more active sites for Fe2+ regeneration, highly improving the performance of the system with regard to PDS activation and subsequent degradation of organic pollutants. We were also intrigued by atomic hydrogen (atomic H*) in the three-dimensional reduction system. As a strongly reductive radical with single-electron capacity, the atomic H* takes H+/H2O as a precursor and forms H+/H2O after donating electrons, completely eliminating the conventional restriction on the operation pH for catalyzing PDS.

Herein, the present study was the first to propose a ternary system comprising an electron source, a single-electron shuttle, and a peroxide compound. This ternary system allowed researchers to minimize the catalyst dosage and rationally design the oxidation system by selecting a suitable constituent of the system for various purposes.