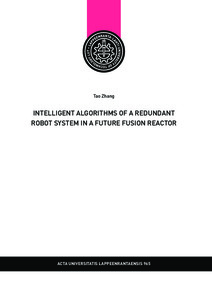 A fusion reactor, also called a thermonuclear reactor, is a large-scale of size device to produce electrical power from the energy released in a nuclear fusion reaction, in which the environment is very hot and radioactive, requiring regular maintenance during the fusion process. A remote handling robotic system is an effective and economic device to promote quality and reduce the time needed for maintenance inside the reactor. This dissertation deliberated the intelligent algorithms to solve the deformation, kinematics and safety, which improves the performance of robotic systems during the maintenance process.

The maintenance robots designed normally have a redundant long mechanism. Due to the complex environment inside a fusion reactor, working within the reachable workspace and maintenance accuracy are highly demanding for the robot. The robotic problems in the fusion reactor environment are complicated, and free motion models are highly nonlinear. Artificial intelligent algorithms are investigated in this study to find a solution for the problems. such as ant colony optimization (ACO), recurrent neural network (RNN) and perceptron, and finally a robot model is optimized to promote robot motion accuracy and prevent it from collision.

In order to work well within the robot’s reachable workspace in fusion reactors, the robot is designed as a redundant mechanism with a long arm. The thesis focuses on three aspects of redundant long manipulators: deflection compensation, collision free and safe motion, and robot calibration. First, the flexible sag of the robot affects robot accuracy, and it is difficult to be modelled by a physical model. A feasible solution based on RNN for deformation compensation was developed as part of this thesis. The RNN has a “memory” function which can predict the deformation of the segment of the robot to reduce the error of the redundant robot motion. Second, the redundant robot’s kinematics is a high-dimension and nonlinear problem, and an analytical method cannot solve this problem directly. A dynamic accuracy colony optimization (DAACO) method was designed, which refers to an evolution theory optimizing ACO by dynamic accuracy. This promotes the accuracy and speed of solving the nonlinear formulation of redundant robot kinematics. Furthermore, a collision detection algorithm to check whether the robot would collide with the fusion device was designed using grey information from the robot’s section plane. Additionally, the motion safety of a double arm robot in the reactor vacuum is studied. A hybrid collision classifier was designed by the perceptron from the robot sensor/signal data such as the position, speed and current. The data used for the training perceptron was pre-processed by using primary component analysis (PCA) and dimension reduction technology to simplify the classification in the perceptron. Third, the motion accuracy of the robot can be improved by calibrating the kinematic parameters. While the robot is planned in joint space independently, a specific trajectory of the slave robot’s end frame forms a group of circle curves that can be fitted by a geometric algorithm to calibrate the kinematic parameters. This geometric calibration algorithm uses the least square method and 3σ rules to ensure the calibration result’s uniqueness and optimality.