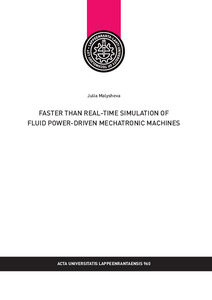 The level of automation of mechatronic machines, such as excavators, logging harvesters or fluid power-driven cranes, has increased significantly over the past few decades. In the machine industry, this led to the emergence and development of novel approaches for the new product development process, such as virtual prototyping. At the design and engineering stages of new mechatronic machine development, virtual prototypes are used for the studying of the design decision effects on machine dynamic behaviour, thus reducing the need for the construction of physical prototypes. Essentially, the virtual prototype of the mechatronic machine is a physics-based simulation model. Mechanical and fluid power components are the most important parts of such simulation models. These components are also inherent to other types of mechatronic systems such as aircraft, heavy industrial process machines, ships, offshore cranes, etc. Depending on the task, the virtual prototype can be run in real time or faster than real time. The required high simulation speed is often a major stumbling block in the employment of more advanced simulation models.

Due to the presence of the nonlinearities and singularities inherent in the mathematical model of the fluid power components, during the simulation a very small time step should be used in the integration algorithm in order to maintain numerical stability of the solution. This may result in the simulation time overflows and the inability to maintain the high simulation speed. Machine learning approach can help in solution of such a problem. In particular, an artificial neural network (ANN) usage for fluid power system modelling can be beneficial. Thus, the work addresses the question of recurrent neural network (RNN) usage for the faster than real-time simulation of fluid power systems. A physics-based simulation model was created using an experimentally verified mathematical model of a hydraulic position servo system (HPS). The RNN of NARX architecture was developed, trained and tested on the training data produced by the physics-based simulation model. A pre-processing technique was developed and applied to the training data in order to speed up the training and simulation processes. The obtained results for the first time show that the employment of the RNN together with the developed pre-processing technique ensures the simulation speed-up of the complex fluid power system at the expense of a small decrease in accuracy.

In the work, another solution for the task of the fast simulation of fluid power systems with singularities originating (in particular) from the presence of small volumes is also proposed. The solution was based on the development and usage of an advanced pseudodynamic solver with adaptive criterion (AdvPDS), which is an enhanced version of a classical pseudo-dynamic solver (PDS). The AdvPDS seeks a steady-state solution of pressure building up in a small volume. Two main advantages of the proposed solver were obtained. The first was the higher accuracy and numerical stability of the solution compared with the PDS, owing to the enhanced solver structure and the use of an adaptive convergence criterion. The second was the faster calculation time compared with the conventional integration method, owing to the obtained possibility of larger integration time-step usage. Simulation results confirmed that the AdvPDS is better than conventional solvers for real-time systems that include fluid power components with small volumes. In addition, the work also studies which of the numerical integration methods incorporated into the AdvPDS ensure the efficient (fast and accurate) calculation of stiff fluid power models. Thus, the effect of three fixed-step integration methods (Euler, Runge-Kutta of fourth order, and modified Heun’s method) were considered. In the work, the numerical stability of the modified Heun’s method was improved by substituting the purely turbulent orifice model with the two-regime orifice model. The two-regime orifice accounts for both the turbulent and laminar flows and thus allows the avoidance of numerical problems related to the small pressure drops. The compiled C language that supports the real-time simulation was chosen as the implementation environment for the developed simulation models. The solutions obtained for the numerical examples using the AdvPDS based on the three integration approaches, their accuracies and calculation speeds were presented in comparison with the solution obtained using a conventional integration procedure. The results showed that, in general, the AdvPDS allows the solution of numerically stiff fluid power models in a very efficient way, ensuring accelerated simulation with high solution accuracy. It was also shown that the simulation speed-up can be obtained not only by the complexity reduction of the numerical integration method inside the AdvPDS, but also by increasing the numerical stability of the employed numerical integration method.