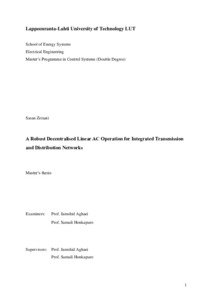 The power grid is developing from a traditional one-way network to a more integrated, complicated structure because of the penetration of electric vehicles, large distributed generators, and renewable energy sources into the grid. Renewable energy sources (RESs) extensive integration into the distribution network causes difficulties that Distribution System Operator (DSO) and Transmission System Operator (TSO) can face. In overcoming the issues such as active and reactive power, voltage profile, congestion management, as well as frequency control, it is urgent to provide a power delivery system based on flexibility to ensure safe, resilient and cost-effective utilisation of the grid. Thus, to overcome the network constraints, the optimal power flow (OPF) is considered in most of today’s grids to facilitate the TSOs, and DSOs to operate and benefit most from the grid.

More importantly, in today’s transmission networks (TNs), the sudden outage of some generation units (GUs) from the generation cycle can cause significant problems such as imbalance between generation and demand-side (consumption) and thus increase the cost of operating the power system. On the other hand, distributed generators (DGs) with their ability to react quickly in distribution networks (DNs) can be a relatively good alternative to the disconnected fast generation units (FGUs). Therefore, a robust cooperation problem for integrated TN&DN is essential. However, it is unattainable to solve the cooperation of the TN&DN problem without considering the AC optimal power flow (ACOPF), the operators' independence, and the information privacy.