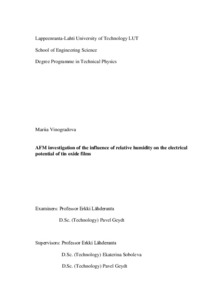 AFM investigation of the influence of relative humidity on the electrical potential of tin oxide films.pdf (4.509Mb)
Lataukset:

The influence of the relative humidity (RH) of the air on the electric potential of the materials' surfaces was investigated. Nickel-doped tin dioxide films were synthesized by magnetron sputtering in argon plasma. Atomic Force Microscope (AFM) was used for the experiments. The electric potential of the films and their topography were measured by Kelvin Probe Force Microscopy (KPFM). During the measurements, the humidity was varied cyclically. The humidity setup consisted of a tube system, bubbler, and humidity sensor connected to an Arduino Uno motherboard. The analysis of the data obtained was carried out, comparative histograms for different humidity levels were presented. As a result, it was shown that the film potential changes with a change in RH, although no strict correlation was found between these values.