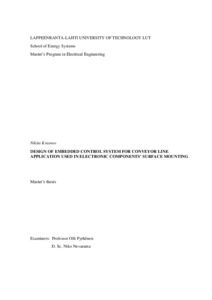 This study focuses on the process of surface mounting of the electronic components over the printed circuit boards. The system includes multiple operational stages, where printed circuit boards are transported by conveyor lines. The transported board is not fixed on the conveyor belt, but its’ accurate positioning is critically important to ensure successful transfer to the receiving stage and to avoid the entire process stop. Thus, the necessity of control of the board position offset during the transportation appears.

The main objective of this study was to develop embedded control system, which can synchronously control multiple stepper motors used in conveyors. In order to fulfill this task, the principles of the synchronous stepper motors’ control were studied and based on it the structure of the particular control system was defined. One of the microcontrollers is set as master and translates the reference value to the other system microcontrollers. The controlled variable is the position offset of the printed circuit board location during its transportation by the conveyor. The actual value of the offset is estimated by a position sensor, which is mounted on the conveyor side. The reference value is set using the LCD-keypad shield, which is connected to the master microcontroller. The latter transfers this reference synchronously to all slaves, which derive control signals for the connected stepper motors. One of the motors is directly controlled by the master.

The electrical connections between the control system equipment were designed and after that the corresponding printed circuit boards’ topology drawings were developed. Then the programmable code for microcontroller was constructed basing on the common programming structures, and the simplified model of a single conveyor control driven by a stepper motor was created in MATLAB-Simulink environment. As a result, an embedded control system capable of multiple synchronous control is developed that can be considered for practical implementation.