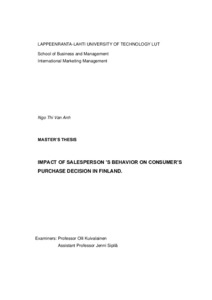 This thesis aimed to study the impact of salesperson’s behavior on customer’s purchase decision in Finland. The theoretical part focused on the literature of salesperson role, different salesperson’s behavioral aspects, and customer purchase decision in general. In this study, five behavioral aspects were chosen to study: ethical behavior, listening ability, relational skills, emotional intelligence, and customer orientation. For the empirical part, the qualitative method was conducted with semi-structured interviews. There were ten interviewees who were found to be interested in the topic and voluntarily participated in the study. The result of the study emphasized the important role of salesperson in the customer’s purchase decision It also showed that each of the five behavioral aspects of salesperson had an impact on a customer’s purchasing. Ethical behavior and listening skill were found to be the most central aspects of salesperson’s behavior. From the result, the study suggested open opportunities for further research with quantitative methodology on the same topic. It also suggested companies have regular training on salesperson, regular survey to take feedback from customer and yet important the awareness of salesperson’s role in the success of selling activities.