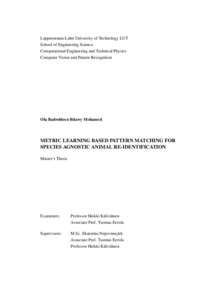 In the active effort to monitor and protect endangered animal species, modern technology is replacing the previously used conventional techniques of tracking using GPS or tagging which are considered invasive in nature. The non-invasive technology such as camera traps collects a large amount of data remotely, enabling the use of computer vision techniques to perform the analysis including re-identification of animal individuals. The re-identification of the animal individuals can be done by training a convolutional neural network to measure the similarity of fur pattern between images. This thesis extends the re-identification method by building a fully automated and species agnostic framework, where given an image, the framework is capable of detecting the animal in the image and their distinguishing fur or pelage pattern. This pattern is then used to match the animal to the most similar individual in the dataset of known individuals. The framework achieved an accuracy up to 89.1% and 82.1% on zebra and giraffe datasets respectively.