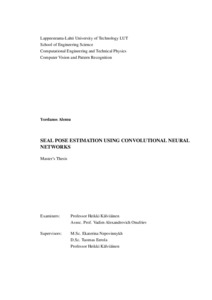 Conservation of the endangered Saimaa ringed seal population requires an effective approach to re-identify animals, which would allow biologists and ecologists to monitor the population. The ideal approach of ringed seal re-identification would be to automate it using computer vision techniques. Despite recent progress, the re-identification process remains challenging due to, for example, the large pose variation and illumination conditions of individual animals in the image. This thesis proposes an approach for seal pose estimation to simplify the subsequent re-identification steps. The problem of the seal pose estimation is formulated as a seal body keypoint detection task and solved using a stacked hourglass network based method. Moreover, the network training is done based on the depth of the hourglasses using fewer parameters. The obtained results on the Saimaa ringed seal image database show that the method’s accuracy on detecting keypoints increases from 65.3% to 76.7% when the depth is increased.