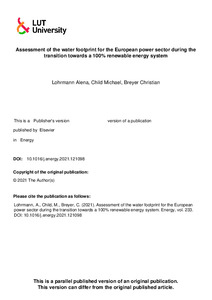 The transition towards a 100% renewable energy system may be an opportunity to resolve the water-energy nexus. However, deployment of some technologies might impose additional strain on water ecosystems. An energy-system-wide analysis of water demand in Europe was performed for the period 2015–2050 using the LUT Energy System Transition model for two scenarios: Area (with electricity interconnections) and Regions (without). For fossil-fuelled power plants, the water footprint in 20 European regions may decrease considerably until 2050, by 28.3% in the ‘Area scenario’ and 24.2% in the ‘Regions scenario’. However, total water demand in the Area scenario increases in 5 regions on average by 14%, from 7% (Balkan-West countries) to 24% (Sweden). Further, Turkey, Norway and Sweden may have the largest water demands in Europe due to the commissioning of new hydropower plants. Results indicate discussions on the sustainability of energy transition scenarios should be expanded to include water footprint.