Developing concept of an online service for software startups and entrepreneurs 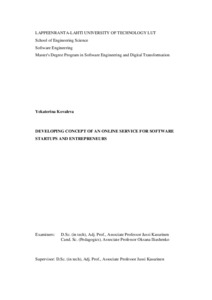 The purpose of the research is to develop the concept of an online service that can support the promotion and development of startups. The study was carried out based on “Women in Technology” (WITECH) research project. The subject of the thesis is design of the service aimed to support start-ups in their promotion. Research methods: for the research part the grounded theory was taken as a basis, an interview was conducted and analyzed using open coding. Also, the results of the study were supplemented with a survey. In the practical part, the online service was modeled in UML notation. Within the research project, interviews were conducted among women entrepreneurs from Finland. The research also presents a survey among students. Based on the results of this work, conclusions about what difficulties women have on the way to entrepreneurship were drawn. The obtained data served as the basis for the development of the concept of an online service aimed at supporting the promotion of the startups. The initial requirements for the future service were defined, and models in UML notation were developed to illustrate the functionality of the future system. After that, the project work plan was built, the human resources for the project implementation were determined.