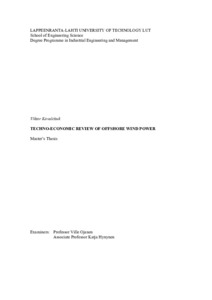 Among renewable energy sources, wind has received a pivotal role in diversifying the global electricity sector in order to lower the heavy dependency on non-renewable fossil fuel supplies and related emissions. Wind energy, generated by harvesting air in motion, is represented by onshore and offshore installations located on land and in bodies of water, respectively. While onshore wind is widely adopted at present, the offshore alternative is still on its quest for cost competitiveness, given the complexity associated with the marine environment and its fairly recent commercial development. Nevertheless, offshore wind has received increasing interest due to the untapped availability of higher and often smoother resources than onshore, attracting coastal countries worldwide for large-scale electricity generation to address their renewable production targets.

This study investigates the current state of the offshore wind industry from a techno-economical perspective, highlighting current and future trends in particular. Based on a thorough literature review, offshore wind has proved its prominent status in the context of a low carbon society, able to satisfy the growing electricity demand, despite the major drawback of being a highly capital-intensive technology. The future for offshore wind is promising, pushing the industry towards gigawatt-scale farms and deeper water locations further from shore while showing a substantial decline concerning associated costs in the upcoming years.