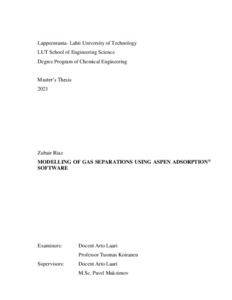 Gas separation is an important and extensively studied topic in chemical and process engineering. Its importance comes from the fact that almost all the manufacturing processes involve separation at some point in the process and separation adds to the major cost of the complete process. Capture and removal of some gases, such as carbon dioxide, and water, is important when CO2 emissions are reduced, and the captured CO2 is utilized.

This study focused on finding the right tool for modelling and simulation of adsorption processes. For this purpose, a flowsheet simulator by AspenTech called Aspen Adsorption® was used to understand and evaluate its capabilities.

A comprehensive literature review was conducted in Chapters 2 and 3 to understand how to separate gases and why adsorption is in some cases a useful process. These chapters discuss in detail the need to capture CO2, the different methods available for separation, adsorption processes, and adsorption materials available. The phenomenon of adsorption is understood
through isotherms, and they are also briefly explained here. Finally, the modelling of the adsorption process was analyzed to understand the mathematical equations that govern the model for the simulations.

Before the practical part, a short chapter is included to get the idea of the user interface, available options, and a general guide about setting up the simulation in Aspen Adsorption®.

Several cases and configurations were considered for the simulation. The first case is a simple once through adsorption case for nitrogen and oxygen separation. The second case is for the separation of methane and carbon dioxide from biogas. The third case is the cyclic set up of the biogas case involving a TSA to simulate adsorption and desorption cycles. The last case is to check the capabilities of the software for the adsorption of water.

Aspen Adsorption® was found to be a comprehensive tool for the modelling and simulation of simple adsorption processes, as well as the cyclic processes. Flowsheet setup is rather simple and straightforward, but interpretation of warnings, errors and some results might be hard to comprehend for an inexperienced user. It was found that the setup of the Cycle Organizer is complicated and some training and support from the software manufacturer would be useful to set up the Cycle Organizer correctly.