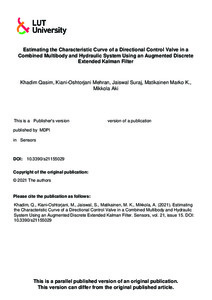 The estimation of the parameters of a simulation model such that the model’s behaviour matches closely with reality can be a cumbersome task. This is due to the fact that a number of model parameters cannot be directly measured, and such parameters might change during the course of operation in a real system. Friction between different machine components is one example of these parameters. This can be due to a number of reasons, such as wear. Nevertheless, if one is able to accurately define all necessary parameters, essential information about the performance of the system machinery can be acquired. This information can be, in turn, utilised for product-specific tuning or predictive maintenance. To estimate parameters, the augmented discrete extended Kalman filter with a curve fitting method can be used, as demonstrated in this paper. In this study, the proposed estimation algorithm is applied to estimate the characteristic curves of a directional control valve in a four-bar mechanism actuated by a fluid power system. The mechanism is modelled by using the double-step semi-recursive multibody formulation, whereas the fluid power system under study is modelled by employing the lumped fluid theory. In practise, the characteristic curves of a directional control valve is described by three to six data control points of a third-order B-spline curve in the augmented discrete extended Kalman filter. The results demonstrate that the highly non-linear unknown characteristic curves can be estimated by using the proposed parameter estimation algorithm. It is also demonstrated that the root mean square error associated with the estimation of the characteristic curve is 0.08% with respect to the real model. In addition, all the errors in the estimated states and parameters of the system are within the 95% confidence interval. The estimation of the characteristic curve in a hydraulic valve can provide essential information for performance monitoring and maintenance applications.