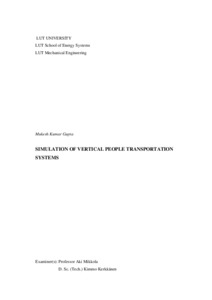 The simulation model was validated using the measurement data from the real elevator. The maximum peak to peak value at the nominal speed of lateral and vertical vibrations were the main criteria for the model validation. In the validation comparisons, there was a good correlation between measurement data and simulation data. A brief investigation of model behavior was made while replacing one of the components with another component for same functionality in the model.

All together 72 combinations of nominal run parameter configuration were simulated by four different elevator specifications. Sensitive analysis showed that in the majority of cases, the simulation model exhibited its sensitivity and robustness in projecting the dynamic behavior of elevator systems. However, in few cases the deviation of the results from expectation. The fundamental causes for this deviation were investigated and corrective action was suggested to avoid this deviation. Finally, three load case scenarios were modeled and evaluated to showcase the capabilities for other malfunction modeling and more effectively creating synthetic data using dynamic simulation.