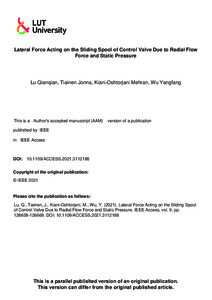 The hydraulic sliding-spool valve is a key component to control the flow rates and thus pressures in different hydraulic volumes. The lateral force on the spool is one of the important effects resulting from moving resistance. This paper presents research aimed at understanding the effects of radial flow force and static pressure upon the lateral force. The radial flow force is calculated from three types of control surfaces labelled with square land, 45° conical, and round curved surfaces, for discovering the effects of control profile, combined with inlet and outlet control conditions. The pressure difference effect is analyzed along with six cases under the same orifice opening, and the radial flow force is found to vary linearly with the pressure difference. The results also indicate that the radial force for the inlet control mode is less than that of the outlet control mode. The jet angle is discovered to not only be related to the annular orifice opening and gap clearance, but is also influenced by the flow direction and control surface profile. The static pressure is the predominant factor in the lateral force compared to the radial flow force. The results indicate that the static pressure variation on the surface of the cylindrical spool shoulder increased linearly with the inlet pressure; and two stagnation points can be observed in the case of the valve cavity with oil passages on the same section, and square land control edge profile. The lateral force on the spool increases with the pressure, and could reach to the maximum of 300 N, implying that this force should be taken into account in the selection of an actuator, especially in high pressure applications.