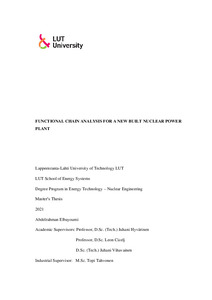 Nuclear power plants (NPP) are well-known for their multidisciplinary character as well as the high degree of coupling and interaction between their elements. Consequently, regulatory bodies tend to induce a massive number of requirements to ensure the nuclear safety of the power plant, these requirements aim to apply the defence-in-depth (DiD) safety approach. In Fennovoima Hanhikivi 1 (FH1) NPP, the DiD approach is applied through formalizing functional entities which are assigned to various DiD levels.

Each functional entity consists of safety functions that share common non-functional de-sign requirements including safety class, failure criterion, diversity, separation, seismic and environmental requirements. By investigating the safety functions of FH1 NPP, one concludes that they are significantly interconnected and exchange a huge number of signals. Therefore, verifying each safety function independently is not effective because a function may seem to perform its function when it is considered alone, but challenges are found when also the interconnected functions are considered. Thus, it becomes essential to verify the whole functional chain which can be defined as a set of safety functions that interact together to guarantee the success of plant systems.