Business Models in the Digital Age: The Internet of Things 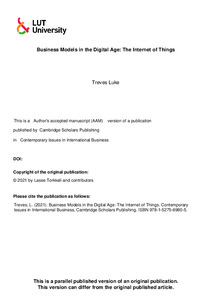 We are living in what is commonly referred to as the “digital age,” which is distinguished by an overlapping ecosystem of digital technologies – each one building on those before and catalysing those to come. This process often referred to as ‘digital transformation (DT),’ is not only changing nearly every aspect of our personal and communal lives, but also the dynamics of companies and organisations of every size, and in every industrial sector. It is requiring them to realign their products, services, processes, and business models to the conditions of an increasingly digital world (Kreutzer et al., 2017, p. 1). It is also rewriting the rules of customer engagement, competition, data utility, innovation, and value. If companies do not find an appropriate response to these changes, they run the risk of going out of business. Consequently, responding to them requires more than a piecemeal approach; it calls for a total integrated effort – a process of holistic DT within companies, other types of organisations, and whole economies more generally. A key element in this DT will be a company’s ability to adapt its business models (BM) to take advantage of and meet the challenges these technologies create. History has demonstrated that many prominent firms that have previously been known for their innovative products, suddenly lose their competitive advantage due to a combination of blinkered mindsets, inflexibility to adapt, or an inability to recognise the threats that new technologies or start-ups pose to their existing BM(s). Strong players such as AEG, Blockbuster, Grundig, Nixdorf Computers, Triumph, Brockhaus, Agfa, Kodak, Quelle, Otto, and Schlecker are vanishing from the business landscape one after the other due to their failure to adapt their BMs and strategies to the changing environment before it was too late (Gassmann et al., 2014).

Peter Drucker, often considered the father of modern management, observes that: “Today’s competition between enterprises is not the competition between products, but the competition between business models.” Building upon this idea Matt Atkinson Chief Marketing Officer at Tesco PLC provides a succinct and insightful overview of the modern economy and organisational landscape in the Foreword of the academic book “The 10 Principles of Open Business: Building Success in Today’s Economy” (Cushman & Burke, 2016). Atkinson reflects, “The world is in a state of transition, where technology, customers and economics are driving change (no longer products and the producing company). At the centre of which is the ongoing demand from customers, for transparency and collaboration. The connected nature of these technologies, and the shift in these technologies are creating new businesses, and new business strategies and models. It is essential that businesses are reactive to these changes and adopts appropriate tactics.” Subsequently, the “BM” concept has become extremely influential over the past 20 years.

A BM can generally be defined as a unit of analysis to describe how a company works. More specifically, the BM is often depicted as an overarching concept that takes notice of the different components a business is constituted of and puts them together as a whole (Osterwalder & Pigneur, 2010). This concept has been more prevalent in the communication of businesspeople and in the business press than in the management research literature, but the latter literature has witnessed a significant increase in interest over the past decade. Likewise, business model innovation (BMI) has been increasingly promoted as a necessary reaction to strategic discontinuities and disruptions, and is shifting bases of competition, increasing the importance placed on innovation and knowledge as value-creating attributes, and is leading to the emergence of new forms of competition through the development of new BMs based on DT. Added to this mix the digitisation of society and the economy, founded on technologies such as the Internet of Things (IoT); is transforming the value propositions and BMs of companies, organisations, and vendors, by enabling them to adapt existing or introduce new BM constructs that allow them to remain relevant and derive value for all of their stakeholders. For example, “servitization” models that involve companies developing digital capabilities to provide services and solutions to their customers, which supplement their traditional product offerings, are becoming increasingly popular. This type of BM creates new revenue streams by allowing the manufacturers and service providers to monetise the data they collect as part of the process and enhance existing offerings with new service level agreements (SLA).

These attractive new opportunities are resulting in true organisational and cultural transformation as much as a technological advancement. This demands what Kranz (2017) refers to as an “architectural approach to IoT deployment,” which follows standard deployment patterns and the making of small modifications based on a situation and the specifics of the problem being addressed. The evolution of business perspectives of the IoT can be seen to be driven by two underlying trends: i) the change of focus from viewing the IoT primarily as a technology platform to viewing it as a business ecosystem/network; and ii) the shift from focusing on the BM of a company to designing ecosystem/network BMs (Leminen et al. 2012). Adopting an ecosystem/network approach enables companies to break down internal and external silos and requires a more a holistic view of the enterprise. In this context, companies are required to look at BMs beyond a firm-centric lens and respond to changing business dynamics as part of an ecosystem/network of partner stakeholders e.g. other companies, Government agencies and customers. In other word’s an agile and integrated approach to BMI is essential for companies to survive and excel in the digital age. This is critical in the case of so-called ‘Digital’ or ‘IoT’ entrepreneurs whose ventures and transformation of existing businesses through the creation of novel digital technologies and/or novel usage of such technologies; and are considered by many countries as a critical pillar for DT and resulting digital economic development. This idea is explored in more detail in the remainder of this chapter