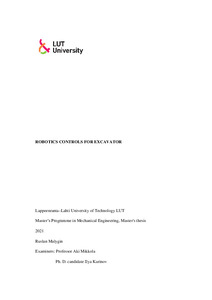 The main direction of development of such earthmoving machines as excavators is aimed at increasing its efficiency. Efficiency is increased by improving automatic control systems, accuracy, and speed. Modern research is aimed at studying robotic excavators. In this master's thesis, the main objective is to choose the most appropriate method of inverse kinematics applied on the excavator model. Also, the implementation and tuning of PID controllers to increase the efficiency of the application of IK.

In the theoretical part of the master's thesis a literature review was carried out, which allows to immerse and deepen in the studied topic. The fundamentals of multibody systems in space, three methods of inverse kinematics (CCD, Triangulation, FABRIK), and implementation of PID controller were considered.

In the practical part of the master's thesis all three considered methods of Inverse Kinematics were implemented on the excavator model. Such software as Mevea and Simulink (MATLAB) were used for the research. The PID controllers were implemented in the actuator controls. Experimentally, the most suitable IK method was identified according to such parameters as: bucket-to-target path, accuracy, and time to reach the target. The most suitable method makes sense to apply in the research and design of robotic excavators as well as digital twins.