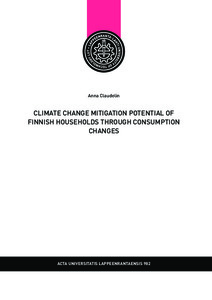 In order to achieve the universal goal of limiting global warming to 1.5 ℃ above the preindustrial level, human beings must take action in all sectors. Approximately 70% of global greenhouse gas emissions are related to household consumption. Accordingly, as public awareness regarding climate change has increased, there has been an increase in interest, among both scholars and consumers, in ways that individuals can participate in climate change mitigation.

This doctoral thesis aims increase understanding regarding the potential of these actions through a multimethod approach. Various quantitative methods are used, including calculations based on statistical data, questionnaires, and carbon footprint calculations. The thesis consists of four publications, three of which include carbon footprint calculations. Both the statistical data and data from questionnaires are drawn from the Finnish context. Therefore, there can only be cautious applications of these conclusions to other similar countries.

The average Finnish household could reduce its annual monetary consumption, and simultaneously reduce its greenhouse gas emissions, by approximately 3400€ with moderate changes to their consumption habits. However, reducing consumption might create a rebound effect in which this saved money ends up being spent elsewhere, like on travelling, or invested in an unsustainable cause upon being deposited into a bank account. The saved money should therefore be impact invested, in renewable energy, for example, to avoid this rebound effect; this would lead to further greenhouse gas emission reductions. In this dissertation, a double impact framework is created to assess these potential greenhouse gas emission reductions, and calculations on these reductions are presented.

In the light of this thesis, consumers in developed countries have significant potential to reduce greenhouse gas emissions and can contribute to achieving the 1.5 ℃ goal. However, despite increasing awareness of climate change mitigation, global greenhouse gas emissions are still increasing. One way to inspire consumers to reduce their impact on the climate could be through an increase in both the confidence of knowledge of mitigation actions and impact investment options.