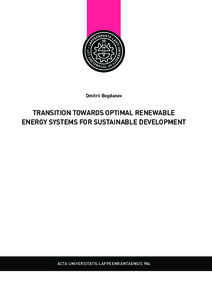 The world is in transition from current fossil fuel-based decoupled energy sectors, towards defossilised and integrated energy systems. Debates on such a transition, initially inspired by fossil fuel scarcity concerns, intensified at the end of the 20th century due to growing evidence of anthropogenic climate change. Finally, a consensus has been reached that energy systems have to reach net-zero greenhouse gas emissions by the middle of this century. However, the current growth rates of sustainable energy technologies cannot yet fully cover the energy demand growth and greenhouse gas emissions still increase. Another concern is a lack of agreement on the main tools of the transition: despite the fast maturing of renewable energy generation and energy storage technologies, technologies of questionable long-term sustainability are still discussed as pillars of future energy systems. This study aims to investigate the technical feasibility and economic viability of a fast transition towards fully sustainable renewable energybased systems by mid-century and to provide knowledge about the possible pathways of such a transition, the role of different technologies, consequences of regional climate conditions and current system structures, and the impact of system sector integration.

Using the right modelling tool to answer these questions has the highest importance. Due to the variable nature of modern renewable energy resources (mainly solar and wind) the temporal, spatial and technological resolution of the model plays the most important role. To fulfil these requirements to the highest extent and make possible the simulation of integrated energy systems, the LUT Energy System Transition model has been developed and expanded for this dissertation. This optimisation model with myopic foresight allows simulation of an energy system’s operation, including the entire energy system or individual sectors, in full hourly resolution. The model defines optimal energy transition pathways considering power, heat, transport and industry sectors. The development process of the model is presented alongside the main findings.

The results show that renewable-based energy systems are feasible, 100% renewable energy supply can be reached in all energy sectors and all regions in the world. Every region in the world can satisfy its growing energy demand with local renewable resources, mostly solar and wind. In addition, energy demand and supply can be balanced for each hour using existing renewable electricity generation, energy storage and bridging technologies, while geothermal, hydropower and bioenergy, with limited potentials and partly negative impacts on the environment, play minor roles. The power sector and electricity as an energy carrier will become the backbone of integrated energy systems.

Sector coupling can bring additional complexity to the transition, but at the same time it provides benefits: additional sources of flexibility, decreasing the electricity cost, accelerating the transition and leading to a substantial increase in energy system efficiency. Direct electrification must be pursued wherever possible to avoid the use of costly e-fuels and decrease the overall cost of energy. The cost of electricity supply in renewable energy-based systems will be lower than that of fossil CCS or nuclear alternatives, and lower than levels of today. Thus, according to all criteria listed in the dissertation, renewable-based systems are better or similar to alternatives, making the direct transition towards renewable-based systems a Pareto optimal solution.