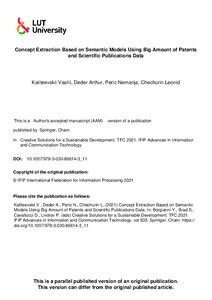 Formalisation of heuristic methods for supporting the conceptual design stage of product and technology development has been extensively evolved in industry during the last half of the century and gradually more formally appears in academic context nowadays. Due to the considerable interest from the Industry and the Academia, heuristic approaches such as TRIZ have been strongly developed over the past decades. Thus, TRIZ evolved from a set of empirical inventive principles into a considerably formal approach including techniques for modeling technical problems with the possibility of further overcoming them using formal methods. Moreover, during the last decades, TRIZ has been extensively digitized. Several generations of software have appeared that facilitate the use of inventive methods (Goldfire, Invention Machine). From the trend of digitalisation and the success of machine driven processes, it can be assumed that the further fate of invention methods and formal algorithms for overcoming non-trivial problems lies in the plane of Machine Learning and Artificial Intelligence approaches. The position of the authors is that the idea of ​​automating inventions looks extremely attractive, although in the coming time, digital approaches will rather complement the intelligence of engineers and scientists, rather than replace it. Taking a certain preparatory step towards AI driven inventions, we present a semantic model that can form the basis of future approaches, at the same time, having already sufficient functionality to support the heuristic stage of technology. As part of this work, over 8 millions of patents and scientific publications have been analyzed to extract semantic concepts. A model was built based on Machine Learning methods and Natural Language Processing techniques with the following discussion and application examples.