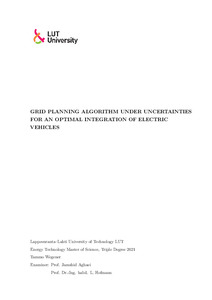 With the integration of electric vehicles charging infrastructure into the medium and low voltage grid, new challenges for the distribution grid operators arise. The power demand due to electric vehicle charging occurs with high simultaneity and power compared to the conventionally connected dwelling loads. In order to effectively integrate electric vehicles into the existing grids, methods are required to prevent voltage band violations and the over-utilization of lines, which could threaten smooth grid operation.

A classic approach to overcome grid bottlenecks, based on the NOVA principle, is the reinforcement of grids. This work investigated the cost effective reinforcement of low voltage networks that have been overloaded due to the integration of electric vehicle charging equipment, using a grid reinforcement algorithm. For this investigation, the cigre benchmark network was utilized based on which, basic assumptions were made regarding the number and charging power of electric vehicles. The number of dwellings within the benchmark grid was derived using the simultaneity factor for different degrees of household electrification, while the quantity of electric vehicles was estimated using current vehicle statistics and future set goals by the government. Furthermore, the costs for different grid reinforcement options in urban areas was established. Novel methods using conventional grid reinforcement, variable transformers, lithium-ion storage and combined heat and power were considered. Using the load torque approach and sensitivity matrices, the most vulnerable grid nodes were ascertained. In addition, uncertainties due to cable temperature and temperature coefficient were depicted and evaluated using a Monte-Carlo simulation.