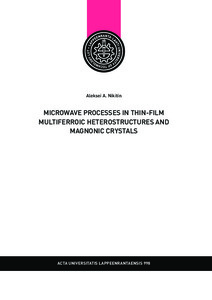 Kaikki oikeudet pidätetään.
In reference to IEEE copyrighted material which is used with permission in this thesis, the IEEE does not endorse any of Lappeenranta-Lahti University of Technology LUT's products or services. Internal or personal use of this material is permitted. If interested in reprinting/republishing IEEE copyrighted material for advertising or promotional purposes or for creating new collective works for resale or redistribution, please go to http://www.ieee.org/publications_ standards/publications/rights/rights_link.html to learn how to obtain a License from RightsLink.
Näytä kaikki kuvailutiedot
Julkaisun pysyvä osoite on
https://urn.fi/URN:ISBN:978-952-335-751-8

Artificial spatially periodic magnetic media, known as magnonic crystals (MC), are one of the key building blocks for magnonics widely used for microwave signal processing and data transfer. The general idea of this work was to focus on the perspective multifunction approaches in the field of magnonics in order to overcome the constraints inherent to conventional MC. Artificial ferrite-ferroelectric (multiferroic) structures, exhibiting a strong coupling of magnons and microwave photons, paves a way to this aim. This coupling constitutes new quasiparticles called electromagnons and, therefore, periodic multiferroic structures are known as the electromagnonic crystals. The novelty of this work is based on solutions to the key problems of voltage-controlled microwave devices that have limited their potential for applications. Namely, known MC composed of ferrite-ferroelectric structures show limited potential for a reduction in energy consumption and miniaturisation of magnonic circuits. An understanding of the full wave spectrum of multiferroic multilayers, as well as electromagnonic crystals based on them, is the key to solving the above-mentioned problems. Accordingly, a general electrodynamic theory for dispersion characteristics of waves propagating in ferriteferroelectric multilayers was developed. The derivation was based on the full set of Maxwell’s equations taking into account retardation effects. Applying the developed theory, an enhancement of the microwave electrodynamic coupling of waves in ferriteferroelectric structures was achieved. This peculiarity was used to reduce the control voltage and to increase the tuning efficiency of microwave devices, which promises to be fast and low energy consuming. Theoretical simulations are also supported by experimental results that confirmed the conclusions drawn. For these investigations, conventional microwave measurements were performed. In addition, the experiments using space- and time-resolved Brillouin Light Scattering spectroscopy were carried out to identify peculiarities of spin-wave dynamics in MC that may enrich the properties of artificial spatially periodic structures for modern magnonics.