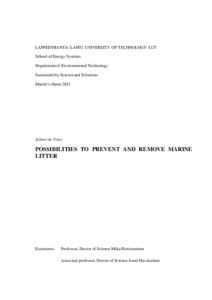 Marine litter is a major global problem that affects not only the environment, but also the economy and the society. The main source of marine litter comes from land-based activities, of which a large quantity of land-based waste is transported via rivers into the seas and oceans. To tackle the inflow of litter into the marine environment this thesis focuses on marine litter in the riverine system. Numbers regarding the amount of plastic waste that is entering the ocean differs from various sources, although the yearly input of plastic waste reaching the ocean is millions of tonnes. In addition, to addres the main flows of plastic waste entering the ocean two lists of the 20 most polluting rivers are shown. Likewise, as the quantity of marine litter, these two lists have different outcomes. Furthermore, this report shows the current situation regarding riverine marine litter and which possibilities there are to prevent and remove marine litter. Although the possibilities to prevent marine littering are mentioned, the main focus of this thesis is the removal technologies for marine litter in rivers. Five different removal technologies have been outlined and these are compared by various specifications, operating conditions and costs. In addition, it is mentioned where the different removal technologies can be used best. This is done by using a scenario shown in a scheme.