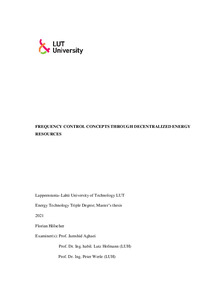 With the transition of the electrical energy market towards renewable energy sources, new challenges in the field of power system stability arise. As inverter-based resources, such as wind, solar and accumulators, are integrated into power systems, directly grid connected synchronous generators are displaced and system inertia deteriorates.This leads to a requirement for new methods of frequency control.

Fast frequency response is a recently introduced term to describe a variety of controlschemes that aim to include modern power sources in the provision of inertia andcontrol energy. This work investigates the feasibility of different approaches, with a focus on wind, but also including photovoltaic power. Deloading as well as inertia extracting strategies are investigated, all in a 12 GW, non-aggregated, 12-bus powersystem. After observing the influence of reduced system inertia, the control scheme’s effectiveness is tested in a number of comparative studies, comparing results for different wind power penetration depths and wind speeds, as well as testing the inclusion of photovoltaic power.

It has been found that, due to the fast response of inverter-based resources in comparison to mechanically actuated primary response in thermal power plants, faster changes in grid frequency can be compensated and even over-compensated, if fast frequency response methods are implemented. In wind power plants, deloading strategies were more successful than inertia extraction when operating at medium and high wind speeds. For high renewable power penetration depths, over-speeding showed the most promising results out of the compared control schemes. It was further found that due to the reduced reserve power for deloading at low wind speeds, inertia extracting methods are more effective in these cases than pitch-controlled deloading. Photovoltaic power was found to be especially suitable for the reduction of the short-term rate of change of frequency, due to its very fast, purely electronic response.