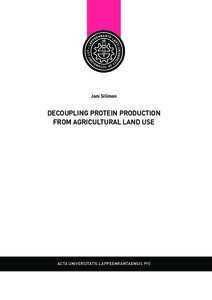 Global food production faces significant challenges owing to the growing population and limited resources including land and freshwater. Animal protein production consumes a major proportion of globally produced food resources, such as plant proteins, but accounts for only a small share of global protein intake. To maintain or improve future food security, alternative protein sources, such as insects and microbial proteins, have been proposed as a part of the solution. However, decision makers do not currently know whether alternative protein sources can enhance food security with minimal environmental impacts as quantitative evidence remains insufficient to form a reliable consensus.

This thesis investigates the environmental impacts of several insect and microbial proteins in comparison to animal- and plant-based proteins. The investigated impact categories were related to greenhouse gas emissions, eutrophication, land use, and water use, and the studied protein sources were crickets, mealworms, flies, proteins derived from beekeeping, and microbial proteins from hydrogen oxidising bacteria. In addition, a novel approach to evaluating the added value of beekeeping was investigated.

Boundary conditions exist for the sustainable use of the investigated insect and microbial proteins. Depending on the energy source, species, production practices, feed sources, and production locations, the investigated proteins could have greater adverse environmental impacts than plant or animal proteins. For instance, cricket production with a low share of renewable energy was found to have larger climate impacts than broiler or swine production in colder regions. However, in most cases, use of the investigated proteins as a direct food source is more sustainable than the use of animal proteins. Compared to plant proteins, less greenhouse gas emissions are possible when non-fossil energy sources are used, and it is recommended that side-streams are used as a feed in insect production as well as a high share of renewable and/or production is adopted in suitable geographical locations for the produced insect species. For the other impact categories, microbial protein production was less affected by boundary conditions, and for insect proteins, similar boundary condition effects were observed as in the case of greenhouse gas emissions.

If environmentally sustainable insect and microbial proteins are used to substitute the most harmful practices in current protein production, the saved resources, such as land, could be used for climate mitigation purposes or to improve biodiversity. Furthermore, pollination services can outpace the environmental impacts of beekeeping; thus, the implementation of pollination services to benefit crop production can improve food security without negative impacts and extra resource use. Finally, although this research focussed on several possible alternative protein sources and production pathways, many alternatives deserve further research.