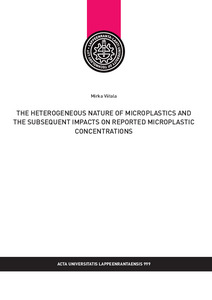 During past decades, the awareness of plastic pollution has increased drastically, and small plastic particles, namely microplastics (MPs), have been found in the environment all over the world. However, microplastic research suffers from the variety of practices used in sampling, pre-treatment, and identification, each having their own limitations, which challenge the comparison and interpretation of reported results. In practice, these challenges limit the utilization of the explosively accelerating flood of monitoring data in assessing the impacts of various MPs in the environment.

This study aims to highlight the challenges related to the assessment of MPs from the environmental samples. This is done by evaluating the special features of different sampling, pre-treatment and identification methods that are commonly used in the MP research field. The main outcome is to underline the features and limitations behind the reported concentrations which should always be considered when reported MP concentrations are interpreted. In addition, this study focuses especially on the assessment of MPs from wastewater treatment plants (WWTPs) and in the aquatic environments receiving treated wastewater. To evaluate these issues, a case study was conducted at a local WWTP and its recipient lake area. The observations from the case study are discussed with the literature in this study.

Most of the variation in the reported MP concentrations is caused by the heterogeneity of the MPs in terms of their size, chemical composition, shape, and colour. The lower size limit of the reported MP concentrations is the most significant factor explaining the variation, and it is affected by all the selected methods from the sampling to the final identification of the MPs. The number of detected MPs is generally higher when smaller MPs are included in the examination, which highlights the importance of including the smallest MPs in future studies. This requires improvements in the purification and identification methods to allow the separation and detection of the smallest MPs. In addition, the variation in the size limits cause a gap between the reported environmental MP concentrations and the studied ecotoxicological effects of MPs. This, in turn, limits the assessment of the impacts caused by MPs detected in the environment.

Due to the variety and special needs of different sample types and the aims of MP studies, standardization of the methods themselves will probably not be the solution to improving the comparability of the MP studies. Therefore, this study suggests that standardized model MPs together with consistent recovery testing methods with selected sampling, pre-treatment, and identification methods would allow an assessment of the representativeness of the resulting MP concentrations. The standardized MPs should represent the heterogeneity of MPs in terms of shapes, polymer types, sizes, and colours. In this way, the reported results could also be compared more reliably. In addition, the limitations caused by the selected methods should be discussed openly along with the reported MP results to allow more reliable interpretations of MP pollution.

The conducted case study provides regionally novel knowledge about MP pollution in the studied WWTP and its recipient lake. The conventional WWTP removed MPs larger than 250 μm from wastewater effectively (98.3%) and directed them to other waste streams. Nevertheless, the impact of the discharged MPs from the WWTP (1 MP/L, >250 μm) or other urban activities was obvious in the bottom sediment of the recipient area compared to other parts of the lake. In addition, the detected MP pollution in the sediment showed a slight increase during the past 30 years.

The findings of this case study emphasise the effect of increasing plastic production on the plastic pollution entering the environment. The high proportion of PET fibres throughout the studied samples especially highlights the role of synthetic textiles as sources of MP pollution entering the environment via wastewater. These results highlight the importance of including microplastic fibres, and especially PET fibres, not only in the monitoring studies, but also in the validation of selected methodologies as well as in the ecotoxicity testing in the future.