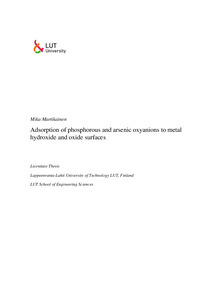 Theory and experimental part of the Licentiate Thesis (8.159Mb)
Lataukset:

This study focuses on two quite distinct elements, phosphorous and arsenic, and their removal from aqueous solutions by adsorption. On the surface, one could assume there is not much common with these two elements. Phosphorous is a vital macronutrient that forms the scaffolding of our DNA, cell membranes, and skeletons. Arsenic is toxic to us even at trace concentrations. Even though the biological and even the geochemical behaviour is different, the chemical behaviour of phosphorus and arsenic in aqueous systems is similar, and both elements form analogous species such as oxyanions like phosphate and arsenate. An additional similarity is their polluting effect on the environment. Both are dramatic pollutants; trace concentration of phosphorous causes paradoxically deterioration of water quality and aquatic life in rivers, lakes, and oceans through eutrophication while trace concentration of arsenic is directly toxic to most lifeforms. In addition to arsenic and phosphorous species, many other oxyanions like chromate, selenate, vanadate, and nitrate pose ever-increasing health and ecological problems. Understanding the behaviour of arsenate and phosphate oxyanions in aqueous solutions gives the background to address these oxyanions as well.

The target of the work was to study real granular porous adsorbent materials, both commercial adsorbents and novel adsorbents, explicitly developed in this work. Granular adsorbents produced during this study were based on either solid industrial waste materials or solid precipitates made from virgin materials. All materials were produced on a semi-production scale, not in the laboratory, so any of the tested materials could be readily implemented in real water treatment applications. The main focus was on seven different iron-based adsorbents. Two of the iron-based materials (mixture of Goethite and Hydroniumjarosite) were explicitly produced for this thesis work in a semi-production scale process. For comparison, three gypsum-based, two Al2O3 -based and two TiO2 based adsorbents were also tested. Three of these comparison adsorbent materials were produced for this thesis work from industrial waste.

The results show that novel Goethite-Hydroniumjarosite adsorbent granules have a high potential as adsorbents for phosphorous removal from waste waters. Also, the phosphate recovery process was developed for these adsorbent granules. It was shown that these adsorbents could be regenerated at least six times with alkali solution, and the adsorbed phosphorous can be recovered as calcium phosphate. It was also showed that the tested low-cost adsorbents produced by granulating industrial waste are highly efficient for phosphorous removal and due to low cost are an interesting alternative to commercial materials produced from virgin raw materials.

Developed Goethite-Hydroniumjarosite adsorbents were tested intensively in arsenic remediation, and these materials showed high efficiency for arsenic removal. When tested according to NSF 53 standard, it was proven that these granular materials could remove As(V) below the drinking water limit of 10 µg As/L with a high capacity and productivity. It was also proven that these materials could remove both As(III) and As(V) species from drinking water. A statistical model for fixed-bed adsorption was developed for Goethite-Hydroniumjarosite granules.