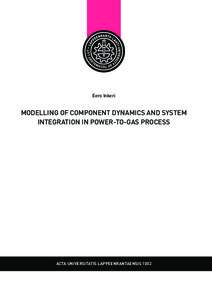 Climate change mitigation requires reducing of greenhouse gas emissions, especially carbon dioxide (CO2). Reducing fossil fuel usage is the main method of combatting greenhouse gas emissions in the energy sector, together with carbon capture, utilization and storage (CCUS). Fossil fuels can be replaced with large-scale low-emission energy sources, such as renewables (solar and wind) or nuclear. The problem with renewables is their intermittency. The amount of available energy varies, which causes a mismatch between energy demand and production. The share of renewable energy can be increased via the electrification of energy end uses, energy storage, grid expansion, and demand response.

This dissertation focuses on power-to-gas (PtG) systems, which convert electricity into chemical energy in the form of synthetic natural gas (SNG) which ideally contains only methane (CH4). The first conversion step is to produce hydrogen (H2) with electricity. Later, hydrogen is synthesized with CO2 to form SNG. The main processes of PtG are already rather well developed on a pilot scale. However, a commercial breakthrough is still to come, partly due to economic reasons and competing technologies. While the existing literature has focused strongly on the steady-state performance of PtG, studies on its dynamical operations are limited, but increasing attention. More specifically, the limitations regarding load and thermal ramping rates and part load, as well as their effect on long-term performance, are unclear.

In this dissertation, different modelling tools are developed to better study PtG systems and their components. The focus is on the dynamics of a PtG system, the performance of its components, and the integration of material and energy flows of the system. The main aim is to discover the technical requirements for efficient transient operations and how buffer storage could compensate for limitations in the dynamics of the methanation process. To evaluate system integration, a case study was conducted on a PtG system combined with a wastewater treatment plant (WWTP) with biogas production. The performance of a biological methanation reactor and CO2 capture with water scrubbing were studied using individual models that account for the flow.

The results show the relationship between full load hours of H2 production, the size of H2 buffer storage, and the dynamic capabilities of the methanation reactor with respect to the efficiency of the PtG system. The suitability of PtG integration with WWTPwas analyzed, taking into account the availability of raw materials for PtG, and usability of side streams as oxygen and heat. The performance (i.e. gas composition and energy consumption) of CO2 capture and biological methanation were studied, and the information can be used further to analyze complete PtG system. Analysis of the developed models revealed how dynamic operation affects system performance. The importance of specific system parameters are emphasized in the study, and suitable values are proposed. Suggestions are given for the sizing of components as well as the capacities for the conversion steps and gas buffer storage.