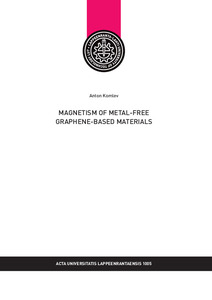 In the present work, the magnetic properties of several carbon materials were investigated. The materials are sp2 carbon allotropes, the magnetic properties of which are determined by intrinsic carbon properties or are caused by modification with nonmagnetic agents. Magnetic characterization was mainly performed by SQUID magnetometry. It is shown how anisotropy of diamagnetic properties can be used for a nondestructive analysis of the alignment of carbon nanotubes in a hosting material. The performed investigation of aniline functionalized graphene revealed the development of antiferromagnetic ordering with a transition near T = 120 K. This transition was found to be a subject of ageing, resulting in the disappearance of the transition with time. The changing over time magnetism was also observed in fluorinated graphite. Our experiments demonstrated that antiferromagnetism is evolving in the fluorinated graphite, resulting in the growth of a wide antiferromagnetic peak at T = 200-280 K. The type of magnetism of fluorinated graphite was found to be sensitive to fluorine content. While C3F samples demonstrated only the transition from a nonmagnetic to an antiferromagnetic state, C2F also had a strong superparamagnetic peak below T = 40 K in the as-prepared condition. The main difference between the results of the fluorinated graphite and the functionalized graphene is that ageing resulted in the opposite changes. In the case of the fluorinated graphite, magnetic response and antiferromagnetism grow, while in functionalized graphene this vanishes with time. We assume that the origin of antiferromagnetism in both cases is due to the formation of linear sp3 defects on the sp2 plane of carbon and the observed change over time can explain some problems with the reproducibility of experiments on carbon-based magnetism.