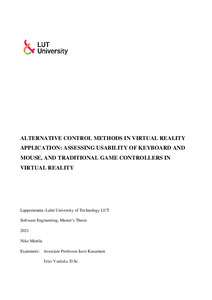 Virtual Reality has been making its appearance into consumer markets since its introduction to in 2016 in a form of Oculus Rift VR-system. The combination of being able to move one’s head in virtual environment with the help of an HMD and simulation of one’s hands to interact with objects with the accompanied motion controllers have open possibilities for vastly higher immersion in video games. However, the adoption rate has been exceedingly slow and has often been cited to being due to the notable cost of the hardware required, the lack of high-profile games, problems with cybersickness making prolonged gaming sessions difficult and issues with larger scale movement capabilities making gaming on the system undesirable. As such new solutions are needed to make the technology more desirable and to smooth out the curve of transitioning to the system. The emphasis on roomscale-VR has resulted in making most if not all pre-existing games not compatible with virtual reality without massive changes to the way the games are played. However, traditional control methods and styles have been successful and there might be season to implementing these in VR-games to make creating virtual reality experiences easier. And outside of issues with rotating one’s player character this control style appears to have some merit and people have expressed their interest towards bringing keyboards to VR. However, the issues with Covid-19 pandemic resulted in postponing parts of the research for later date, making it difficult to form definite results for now.