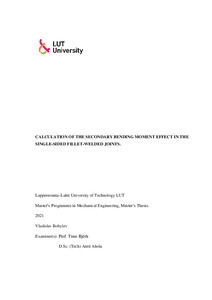 In this study, the effect of the secondary bending moment in the single-sided welds is investigated. The research was based on comparison analysis of analytical and experimental results. The current EN 1993-1-8. 2005 code does not provide explicit guidance for design calculation of the single-sided welds; therefore, the main focus is made on the alternative design verification guide described in Teräsnormikortti № 24/2018.

The analytical results strength capacities were calculated according to EN 1993-1-8:2005 and Teräsnormikortti № 24/2018. Experimental tests consist of the tensile tests of single-sided welded plate connections made of S355 and S700 with total amount of 8 specimens. Four weld geometries with different eccentricity values are designed for laboratory tests. Explicit analysis of laboratory tests is conducted by means of Finite element analysis in FEMAP software.

results, in case of specimens possessing larger eccentricity (>2 mm), obtained prediction were overconservative. Further, finite element analysis facilitated identification of results variation cause, which was clamping conditions of the test specimens which prevented development of maximum bending moment amplitude. According to the results, it can be concluded that design calculation of single-sided welded joints considering eccentricity is challenging due to major dependence on local structure rigidity.