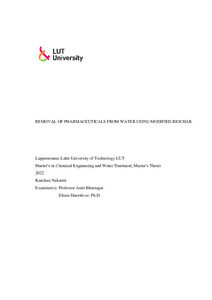 The production of microalgae in wastewater is a sustainable method to obtain microalgal biomass because it biofixes carbon while remediating wastewater. The microalgae can then be pyrolyzed to produce valuable products such as biochar, bio-oil, and syngas after extracting high-value products. Microalgal biochar received attention as a potential adsorbent material because it contains diverse oxygen-containing and nitrogen-containing functional groups which interact with pollutants. In the algal harvesting process, coagulation with FeCl₃ is used, which is a cheap and efficient method and provides iron-containing microalgal biomass. The iron containing microalgal biomass can be used to synthesize iron modified biochar with improved adsorption performance.

In this study, biochar synthesized from iron-containing (Fe-MA) and iron-free (MA) microalgal biomass and used for adsorption of ciprofloxacin (CIP) and diclofenac (DIC) from water. Screening tests were conducted to determine the best biochar based on highest adsorption performance. The best biochar material was used for batch and continuous adsorption studies. In batch studies, adsorption process parameters were optimized. Then, the adsorption isotherms and kinetics were studied. Further, its adsorption performance was compared with commercial activated carbon and evaluated in presence of competing ions. In continuous adsorption studies, breakthrough curves were used to evaluate the performance of adsorption column. The iron-free biochar and iron-containing biochar (before and after adsorption) were characterized to determine physicochemical properties of biochar and to verify adsorption.

The results showed that biochar prepared at 750 °C from iron-containing biomass (FBC 750W) had the best adsorption performance. Characterisation studies showed that the presence of iron enhanced specific surface area, pore volumes and formed iron carbide/zero-valent iron. The maximum adsorption capacity of FBC 750W was 75.97 mg/g for CIP and 40.99 mg/g for DIC and kinetics data followed Elovich model. The equilibrium occurred within 150 min for CIP and 180 min for DIC. Continuous adsorption studies were conducted using fixed beds filled with FBC 750W and had maximum bed capacities of 40.67 mg/g for CIP and 24.69 mg/g for DIC. Therefore, this study shows that iron present in microalgae coagulated with FeCl₃ can be used to synthesize Fe modified biochar which has potential use for adsorptive removal of pharmaceuticals from water.