The Kondo effect in a quantum confined system 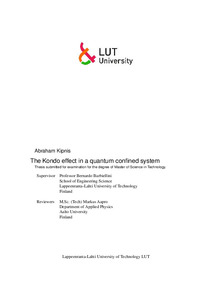 Atomic-scale engineering aims to exploit quantum effects to produce tailored electronic properties. One such effect is the Kondo effect, in which a many-body correlation arises between the spin of an electron in a localized quantum state and the spins of electrons near Fermi energy in its local host environment. The Kondo temperature is the relevant energy scale associated with the electrons involved in the spin-exchange events related to this correlation. The relative strength of surface state and bulk state electron contributions to the Kondo temperature are still under theoretical and experimental debate. Here we use low-temperature scanning tunneling microscopy (LT-STM) and scanning tunneling spectroscopy to tune and measure the Kondo temperature of single cobalt atoms on Ag(111). We adjust the surface electron local density of states around a Co atom by confining it within quantum corrals made from Ag atoms on the Ag(111) surface. By building corral walls from Ag atoms rather than Co atoms, we exclude surrounding magnetic impurities affecting the Kondo temperature. We thus change the magnitude of the Co atom coupling to the surrounding conduction electron bath, thereby the effective Kondo temperature. We measure the width of the Kondo resonance on Co atoms inside corrals as a function of corral radius, which allows to extract the bulk and surface state coupling strengths. Our findings motivate further LT-STM experiments to inform unanswered questions concerning the Kondo effect in single magnetic atoms on metals.