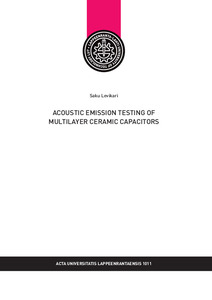 Capacitors are among the three fundamental passive electrical components alongside inductors and resistors. They are found in nearly every electronic circuit, with the function of storing electrical energy and filtering out unwanted components within electric signals or currents. In recent years, the usage of electronics devices has seen an exponential growth, even to a degree that has led to component shortages. The increasing reliance on electronics across industrial and automotive electronics, residential sectors, and consumer devices places an emphasis on the reliability of electrical devices, in which capacitors play a key role. In an electronic device, a failing capacitor can cause unexpected behavior or result in a total failure of the device, which can result in a costly or dangerous situation, especially if the said device happens to play a crucial role, e.g., in an industrial plant or an airliner.

The multilayer ceramic capacitor (MLCC) is the most widely used capacitor type across the electronics industry, with several trillions of units produced annually. The MLCC has become a preferred choice both in consumer and power electronics owing to its favorable electrical characteristics and a small yet efficient form factor. However, the design of the MLCC has its downsides, most notably a brittle structure that is prone to mechanical damage, such as cracks. For failures in electrical devices, capacitors have been estimated to be the culprit in 30% of the cases, and for MLCCs over half of the failures result from hidden cracks that are left undetected on the production line, but cause a sudden failure in the field.

Although new MLCCs can be electrically tested before being installed onto the circuit board, a majority of hidden damage is caused by subsequent tasks on the assembly line. Excess thermal or physical stress from soldering or improper handling of circuit board assemblies can cause cracks or delamination, which may not affect the electrical operation of the component at first, but can cause premature failure in the field. Thus, such types of damage are very challenging to be detected, especially after the electrical device has been assembled.

This doctoral dissertation proposes a new, nondestructive technique for identifying latent damage, such as cracks in MLCCs at the end of the assembly line. The method takes advantage of the piezoelectric effect inherent to most MLCC designs: under electrical excitation, the body of the MLCC starts to vibrate. By measuring the vibrational characteristics of the component by using a contact sensor, hidden structural faults can be detected. Experimental acoustic measurements are performed on hundreds of intact and damaged MLCCs, and signal processing techniques are developed for the acoustic data.

Furthermore, the applicability of the method to assembly line use is considered by developing a machine learning classification system that can reliably discriminate faulty components from intact ones. Methods are developed that allow the classifier system to be trained solely on intact samples, making the method applicable in a production environment.