Design, development, and multi-objective optimization of robotic systems in a fusion reactor 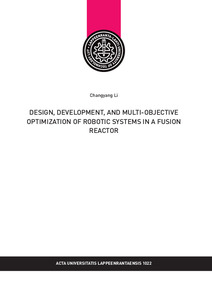 Fusion is the energy source of the sun and stars, and a fusion reactor is a machine to harness the fusion energy. The heat absorbed during the operation is used to produce steam, and then electricity just like a conventional power plant. Worldwide, different fusion reactors are being designed, built, and tested. Currently, the fusion reactor is still in the experimental stage, which will move forward to the demonstration stage and the commercial stage systematically. In recent years, with the development of different configurations of the fusion reactor, different robotic system concepts are becoming more and more attractive to perform different tasks in such a hazardous environment. Thus, two robotic systems for divertor remote handling and vacuum vessel assembly are proposed in this dissertation, among which the robotic system for vacuum vessel assembly is manufactured and tested. The simulation results and practical results reveal that the proposed robotic systems can carry out their tasks in the fusion reactor, and they show better performance compared with similar or previous robotic systems proposed by other researchers. Apart from this, multi-objective optimization of parallel mechanisms was carried out to optimize the parallel mechanism structure to better fit its specific tasks. The results show the robustness of the proposed multi-objective optimization method, and it can be further adopted in future robotic system design. In addition, a summary of optimization on parallel mechanism was concluded, which can act as a guideline for other researchers in the future.