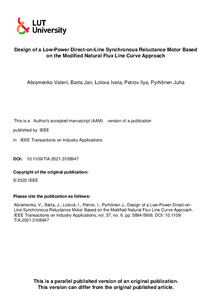 A direct-on-line synchronous reluctance motor (DOLSynRM) with a rotor topology defined by the natural flux line curve approach is studied as an alternative to an induction motor (IM) using a 1.5 kW, 50 Hz synchronous reluctance motor as an example. If an IM stator is used, a direct squirrel cage rotor replacement by a synchronous reluctance rotor equipped with a damper winding might not guarantee a sufficient starting performance. To ensure the strong enough starting capability, the natural flux line curve approach was modified in the motor design. The proposed approach was applied in the optimization of the DOLSynRM using a genetic algorithm. The optimization results show a clear tendency in the rotor design when trying to achieve a reliable starting capability and to maximize the steady-state performance of the DOLSynRM. Both the stator design and the rotor diameter of the optimized DOLSynRM are different from those of a corresponding squirrel cage IM. A DOLSynRM prototype was built and tested. It showed about a 5.4%-unit higher efficiency than the original prototype IM and acceptable starting performance under the rated load condition. The starting capabilities of the motors under study are considered with different loads. The locked rotor apparent power and current stay below permissible limits in both the IM and the DOLSynRM.